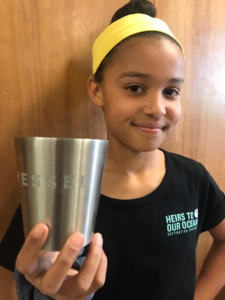 With eleven participating locations on the UC Berkeley campus and in the Telegraph Avenue area in South Berkeley, the Ecology Center and Vessel partnership program, launched in September 2019, is averaging 250-300 checkouts per week with sign-ups steadily increasing.

As businesses and residents alike are still getting accustomed to the Single Use Disposable Foodware and Litter Reduction Ordinance passed last year in the City of Berkeley, they are becoming more receptive to alternatives to single-use disposables in an effort to reduce foodware waste. The pilot’s intentional launch in a geographically dense and connected area, while also partnering with the Ecology Center, has led to much of the success and support the service has received. Having the support and buy-in from local businesses, especially those located within major commuter routes in the South Berkeley area, has made reusables a reality for many.

“I love Vessel!” Karina, a UC Berkeley grad student, shares excitedly. “Finally, a solution for single-use cups. As someone who drinks a lot of coffee, I find it really easy to use and convenient, especially around a college campus. Vessel cups keep the coffee hot, and I don’t have to remember to bring my own mug everywhere. It’s great!”

Many share in Karina’s excitement, with over 50% of first-time users returning to utilize the reusable cup service—a promising look toward a zero-waste future and an aim to reduce the 41 million disposable cups used annually in Berkeley.

The bold ordinance along with the success of the Vessel pilot has garnered both local and national attention.

“It is refreshing to see a shift toward reusables, as opposed to biodegradable plastics (still not good) and compostables, which tend to be the go-to solutions for many businesses that do not want to disrupt their status quo,” Katherine Martinko writes, as she also encourages readers to examine their consumption habits and challenge “throw-away” culture.

In addition to serving as a model for a citywide system of reusables, the Vessel pilot also aids in reaching zero-waste goals for many others.

Berklee Welsh shares, “As U.C. Berkeley’s Zero Waste by 2020 goal quickly approaches, an all-hands-on-deck approach is needed to make significant progress on achieving the stated 90% diversion rate throughout campus.” This multi-stakeholder collaboration has created much opportunity for replication across the state.

“Vessel says that it’s too early to say how the new January law is helping its system grow, but since the pilot began last fall, adoption rates have exceeded the company’s projections, and it now has a waiting list of cafés that want to join the program.”

As we continue to monitor this pilot program through Spring 2020, we hope to encourage even greater efforts in reducing single-use disposables in addition to inspiring an overall more sustainable lifestyle throughout Berkeley, the East Bay, and beyond!

At a growing number of coffee shops, getting a coffee to go means checking out a cup, Fast Company, 1/16/2020

Berkeley’s new disposable cup law is now in effect, but here’s why you might not realize it yet, Berkeleyside, 1/8/2020

Food delivery and takeout are on the rise. So are the mountains of trash they create, Vox, 12/4/2019

To-go coffee cups could become a thing of the past in the Bay Area, San Francisco Chronicle, 11/9/2019