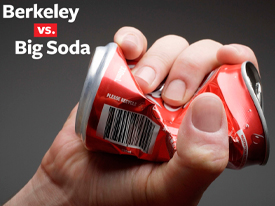 Berkeley vs Big Soda (BvBS) is excited to announce the launch of a poster contest. Big Soda will spend millions of dollars in their efforts to defeat soda taxes in Berkeley and San Francisco this fall. To win, we’ll need to use every weapon in our arsenal, including terrific imagery.

Anyone is eligible to enter. BvBS is looking simple, powerful, and effective images to support the campaign. The basic messages include healthy kids, communities driving social change, and kids’ health over corporate profits. To help inspire contest entries, peruse berkeleyvsbigsoda.com to learn more about the messaging the campaign is using. One of the three themes listed above must be used.

Images will be used for mailings, social media, posters, and other campaign materials in Berkeley and beyond. Don’t wait! Email Marian at marian.mabel@gmail.com. Submissions are due September 5, and the winners will be announced no later than September 8.