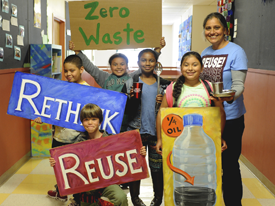 I’ve always been aware of waste in the school setting and in past years focused on recycling and composting. For the past few years, my classes of 3rd graders (who are now in 6th, 7th, 8th and 9th grades) were able to change the school climate and initiate a large scale composting effort. Now every kindergartner at Oxford learns to compost at school.

However, moving to Zero Waste is a bigger challenge. Students need adult models to rethink their material choices – at least initially. Once launched, our efforts became largely student driven. I hope in time more teachers will take an interest. For students, the experience of a Zero Waste classroom is a real and empowering step towards approaching the greater environmental challenges of plastic pollution and the climate change; students learn that their choices – their daily small acts – do matter.

During the summer of 2015, I saw a film at the Ecology Center called “Plastic China,” that opened my eyes and had me rethink what I was teaching my students. In that film, I learned that very little plastic is actually recycled. Instead, it’s “down-cycled.” And then I saw how our plastic waste was being transported to China.

That’s when I realized that recycling is not the answer. It makes us feel okay – even good at times to put something in the blue bin. But this film helped me understand that placing items in the blue bin is not okay.

“So what is the best message to teach my students,” I wondered. No!, I will not tell them about China, because they are too young and it is not their responsibility. But I did want to teach them that we can do something better than just recycling – namely not to create waste in the first place. Our goal could be Zero Waste.

So from the first day, this year’s 3rd graders entered a Zero Waste Classroom. They experienced taking metal spoons with them for school breakfast; and the first comment from a student was: “This feels like home.” Very positive. (Note: the cutlery was obtained through an all school silverware donation drive on Earth Day 2015.)

As a first topic, we discussed the use of plastic water bottles and together watched a documentary film “The Story of Stuff: The Story of Bottled Water.” Then I worked to make sure every child had a re-usuable, preferably metal, water bottle. Some students gifted to others, and we purchased eight Kleen Kanteens to share with the remaining students. Parents noticed the metal bottles. In fact, many families thanked me since they had no idea that tap water was healthier (and less expensive) than bottled water.

Further, in letters to families, I asked them not to buy stuff for school. I would provide all that students needed. And the families followed through. There were no plastic mechanical pencils, no plastic binders, no plastic pencil boxes – none of the cheap stuff readily available at stores that sell school supplies.

In the classroom, we kept it simple. For art projects, we used paper, wooden pencils – traditional and colored ones too, and just one set of black pens only used for final draft copies only. We went without markers, except for teacher board ones, even though our school has a pen re-cycling program. But again, isn’t “recycling” what we’re trying to avoid?

Finally, I asked the custodian not to change the trash bag daily. And so we began the school year. Together the students and I watched – week after week – how little trash we produced. Simply put, not much was going in the trashcan. There were stubbie pencils, when they became too short to hold onto, pencil shavings, the plastic film the math modules come wrapped in, and painted papers from art. That’s it.

We didn’t fill the first trashcan until November, and that’s when I noticed a cultural shift among the students. The children became hawkish about trash and very sensitive about anything that might be discarded. That’s when we made our first film: “The Zero Waste Classroom,” which eventually was discovered by Transition Berkeley, a group committed to zero waste. Soon later, the City honored us too.

I have managed to integrate the required BUSD reading and writing topics into a themed curriculum that I call “Sustainability.” In Sustainability, we have met with solar engineers and observed Project Sunroof to learn about the usable sunlight hours that fall on our school’s roof and then, with facts in hand, each student wrote a persuasive letter which will be delivered to the school’s redesign committee.

We have also had a first hand visit and study of a Tesla automobile, when its owner drove it onto campus and allowed the schoolchildren to explore it. Writing assignments have included a class letter to the Air Resources Board (ARB) to fund more Zero Waste K-12 classrooms in the future. But that’s not all. Our efforts won us a Zero Waste Tour provided by Bay Area Green Tours and funded by Altamont Advisory Board. We visited the Altamont Landfill in Livermore and two businesses devoted to reuse – Urban Ore in Berkeley and Imperfect Produce in Emeryville.

We ended the year by learning about new technologies to reduce consumption of plastic including Bakey’s edible spoons, and disposable water bottles made of algae. And we surveyed new mushroom packaging – and even grew our own stock of mushrooms – as an alternative to plastic and Styrofoam packing supplies.

From the first day of school in September, to the last in mid-June, we made 5 bags, or 20 gallons of trash. In terms of plastic bags, we used 355 less than an average classroom. Plastic bags are a very problematic material- as we saw on our trip to Altamont landfill. The Earth cannot digest plastic. Most classrooms will use 360 plastic bags for trash and those will contain 500 to 900 gallons of trash. In other terms, an average classroom generates enough trash to fill a 4 cubic yard dumpster every year. In our first try, we were significantly able to reduce this amount of waste.

Watch the video about the results below: