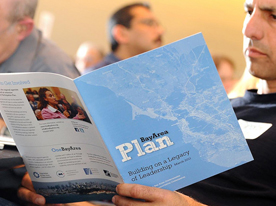 Anyone looking to rent an apartment, get a job, or even make a restaurant reservation in the Bay Area knows one thing for sure: the Bay Area is a place people want to be. By 2040, the population is projected to grow from seven million to nine million, heightening demand for housing and potentially putting hundreds of thousands more cars and trucks on the road. This growth comes as our rapidly warming climate has a low tolerance for the greenhouse gas emissions we create from activities like driving.

In 2008, California legislators decided the state couldn’t sit idly in the face of climate change. They passed landmark legislation, SB 375, directing each of the state’s 18 metropolitan areas to develop a “Sustainable Communities Strategy,” which would accommodate future population growth while limiting transportation related greenhouse gas pollution. Plan Bay Area is the region’s response to this call for action. Plan Bay Area encourages development near transit centers, often referred to as “smart growth.” It attempts to meet nearly 80% of the region’s future housing needs by creating 160 Priority Development Areas (PDAs), like Downtown Walnut Creek and Downtown San Jose, which concentrate housing within walking distance of public transit, grocery stores, and other amenities.

Plan Bay Area supporters are excited by its promise to cut greenhouse gas emissions per person by 15% by 2040, stop urban sprawl for at least 25 years, keep over 60% of new jobs and 80% of new homes near transit, protect natural and agricultural lands through conservation grants, and promote public health by making walking and biking more accessible. All of these efforts will contribute to improved air quality. Grants for affordable and high-density housing and transportation, available through the One Bay Area Fund, create incentives for smart growth.

Over the course of the three years since Plan Bay Area was launched, passion both for and against the Plan has run deep, spanning the political spectrum. On one end of that spectrum, Tea Party and other conservative groups have claimed, quite implausibly, that the Plan will strip people of their freedom and transform quaint, pristine suburbs into government controlled Marxist states. On the other end, progressive groups have expressed concern that Plan Bay Area could displace low-income residents and locally-owned businesses that won’t be able to afford the higher prices that transit-accessible, high density homes and commercial areas can command. Collaboratives like the Six Wins for Social Equity Network, made up of groups such as Urban Habitat and Public Advocates, put forward an “Equity, Environment, and Jobs” scenario, calling for provisions to prevent displacement and protect access to affordable transit and housing.

Three years, dozens of town hall meetings, thousands of public comments, and one very long final meeting after its initial conception, Plan Bay Area was resoundingly adopted by the Association of Bay Area Governments (ABAG) and the Metropolitan Transportation Commission (MTC) early last Friday morning. Advocates concerned about equity had cause to celebrate. Several amendments were made to Plan Bay Area to address concerns about displacement and public transportation funding, including assuring that at least a quarter of funds received from the state’s cap-and-trade program directly benefit disadvantaged communities and linking One Bay Area Grant funding to anti-displacement measures. It may still not be the absolutely perfect plan from many stakeholders’ perspectives, but most agree it is a strong guide to lead us through the next twenty five years of a changing climate, landscape, and population.

Next up: implementing the Plan and ensuring that the array of environmental, health, and social justice benefits promised come to fruition. For more information, and to get involved, start by visiting: