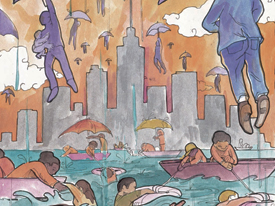 A crowd gathered this morning to send over 100 Bay Area climate activists off on the People’s Climate Train. They’ll travel cross country by train, with workshops on board, and whistlestop rallies at cities along the route. By Sunday, they’ll be in New York, joining the largest climate mobilization in history.

On board is Ecology Center’s Kad Smith, who is participating with the support of the Artisan Hub. He’ll be tweeting his experience @Kad_Smith and blogging at www.kadsmith.com. Join us in following along his journey through his posts!

These movements are coordinated with a climate summit called by UN Secretary General Ban Ki-moon on Sept. 23 in New York City. Past international summits have failed to result in substantive actions to reverse climate change and reduce impacts. Global leaders have said lack of public support has been one reason they have failed to take action. To counter that, the call to join the People’s Climate March is “To change everything, we need everyone.” Moon is asking UN representatives to “bring bold announcements and actions to the summit that will reduce emissions, strengthen climate resilience, and mobilize political will for a meaningful legal agreement in 2015.”

Read more about how the climate train got organized, and it’s journey rolling to the People’s Climate March from this blog post at occupy.com.

One thought on “People’s Climate Train Left for New York, with Ecology Center’s Kad Smith On Board”