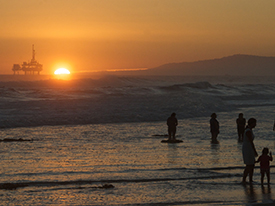 A mailing about the “California Gas Restriction Act of 2015” from the “California Drivers Alliance” went out across California in recent weeks. There’s just a few problems – the California Gas Restriction Act of 2015 is not the name of the proposed law, and the California Drivers Alliance is actually a project of WSPA, the Western States Petroleum Association. The mailer is full of other misleading statements about what the bill would do, and is timed with an important assembly vote on SB 350, with a few moderate democrats on the fence. We’re urging support for this bill, since it moves California forward for decades to come on climate action. Click here to send a message of support for SB 350, along with two other climate-friendly bills, SB 32, and SB 185.
The proposed bill, actually called the Clean Energy and Pollution Reduction Act of 2015, includes three parts to dramatically reduce greenhouse gas emissions: increase California’s share of electricity from renewable sources to 50%, increase building energy efficiency 50%, and cut California’s use of oil in half through programs that enable a combination of new technologies, vehicle efficiency, and better planning. The oil industry is ignoring the other two parts of the bill, and narrowing in on the part to reduce oil consumption, since that’s where they stand to lose money if SB 350 passes. For more, check out this post from the Union of Concerned Scientists.