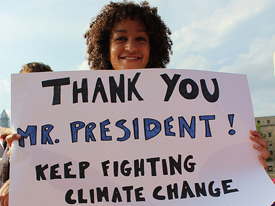 President Obama has stated the decision to approve the Keystone XL pipeline hinges on whether the project would significantly contribute to carbon in the atmosphere. In an interview this past week, Obama also pointed out that claims that the project would be a jobs-creator were not realistic. The 2,000 temporary jobs during construction of the pipeline, and 50-100 permanent jobs are “a blip relative to the need.”
That the President is making these statements publicly is good news for climate activists, who have been mobilizing all year to draw attention to Keystone XL. But it’s still unclear if the Obama administration will axe the project. With a campaign in full swing called “Summer Heat,” 350.org and others are poised to hold steady the pressure on the President to keep his word. Head to this article in the NY Times to read more, or check out 350.org to find out how you can support the campaign for a safe and stable climate.