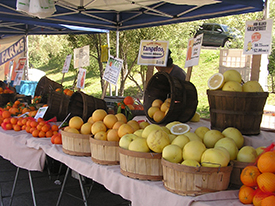 A report released by Berkeley Food Policy Council, Roots of Change, and the California Food Policy Council (CAFPC) unveils 2014 food and farm policy voting results by California elected officials. The 2014 Report on Legislation Related to Food and Farming illustrates how despite making modest progress on food and agriculture issues, the Legislature continues to miss the mark when it comes to passing the transformative – and often controversial – policies needed to address our state’s food, farming, and economic challenges.

The legislature failed to support both a soda tax and a soda-labeling bill that would have significantly helped to protect California’s children and fight diabetes and other diet-related illnesses. In response, Berkeley passed a soda tax with a 76% approval rate. “We hope that local efforts can begin to lead the legislature towards proactive solutions for our food system and public health,” said Martin Bourque, Ecology Center Executive Director and Berkeley Food Policy Council spokesperson. “We need real leadership in Sacramento to overcome the vested interests that prevent us from a healthy, sustainable, and just diet for all.”

Ratified by 19 local food policy councils that form California’s first effective coalition for food system change, this report represents an unusually unified perspective from constituencies representing the diversity of California: rural and urban, conservative and progressive, affluent and low-income. The need for deep policy reform is bringing together a strong base of Californians from Humboldt and Shasta to Sacramento to Orange County to Berkeley, who are determined to push their legislators toward positive change.

The Berkeley Food Policy Council (BFPC) formed originally in 1998 and helped to pass one of the nation’s first school district food policies. Programs that emerged from this group have provided national models on how to overcome significant cost barriers to fresh foods for low income shoppers, how to engage youth in nutrition education and urban farming, and how to work with school districts to create healthy school lunches and cooking and gardening programs. The BFPC has been hosted by the Ecology Center since 2009.

Of the 22 priority bills tracked this year by the CAFPC, nine were signed by Governor Jerry Brown.  Included in this group were AB 1789, a bill that protect bees; AB 1930, which streamlines aspects of CalFRESH; and AB 2413, a bill that establishes the California Office of Farm to Fork, which sets the stage for much-needed food system change. Three of the tracked bills were vetoed. The remaining bills died in committee or on the floor. “We are heartened by the Legislature’s willingness to consider a broader range of food system issues than ever before, a sign that the efforts of the grassroots food movement are gaining influence in Sacramento,” said Christina Oatfield, BFPC Spokesperson and Policy Director for the Sustainable Economies Law Center. “At first glance, this presents a hopeful picture.”

But these results don’t tell the complete story. Many of the most innovative bills, those intended to truly move the needle on critical food system issues, all failed to advance. These included AB 1437, which focused on protecting the effectiveness of antibiotics; SB 935, which ensured a livable minimum wage, and SB 1381 and 1000, which required labeling for GMOs and sugar-sweetened beverages.

Unfortunately, the biggest influence in California’s food and agriculture politics remains that of large corporations and trade groups. PepsiCo, along with its local members and the Chamber of Commerce, led successful lobbying efforts to kill legislation that would have added warning labels to most sugar-sweetened beverages. They also contributed to the demise of Senator Mark Leno’s SB 935, which would have added a cost-of-living adjustment to the state minimum wage. “Corporate food and drink interests are spending millions in our state to ensure that the easiest and most common choice for California communities, especially low-income ones, is the $1 soda or the $1 value menu,” said Justin Rausa, Policy Director with Roots of Change.

With this report, the California Food Policy Council completes its second successful year of collaboration on statewide food policy and celebrates the addition of six new members. With the recent election calling into question recent incremental progress made in national food and farm policy, we need California elected officials to exert their vision and leadership on these issues more than ever.