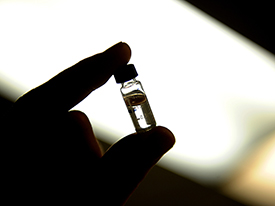 After 39 years, we’re overdue for an update on the Toxic Substances Control Act (TSCA), our country’s chemical safety bill. To protect citizen’s health, we need revisions that bolster the EPA’s ability to test chemicals, and recognize state laws that have been filling the regulatory gap. California has been a front-runner in this. Flame retardants are the most recent addition to a list of toxins – also including BPA, mercury, and lead – that have a state law to limit exposure. Each of these laws serve to make Californians and our environment safer.

A proposed bill is the opposite of the update we need. It’s written by the chemical industry and aims to pre-empt future state laws that would help protect us, and creates lax rules for testing new chemicals. Read on for the alert from the Environmental Working Group, and sign their online petition today to let your senator know you oppose this bill. It’s not safe to allow the chemical industry to dictate their products’ testing and safety regulations.

There’s no time to waste. It’s been 39 years since Congress last passed a chemical safety bill – the Toxic Substances Control Act (often called just TSCA) – and we could finally be seeing a change.

But not the good kind of change.

Any day now, Senators Udall (D-N.M.) and Vitter (R-La.) will introduce the chemical industry’s dream bill. Companies have spent millions lobbying to protect their bottom lines, and now they’re using their muscle in Congress to pass a reprehensible bill disguised as “reform.”

In reality, this bill is even worse than the original.

We must put a stop to the chemical industry’s bill before it gets any more support in Congress – will you contact your senators right now and urge them to oppose Sens. Udall and Vitter’s atrocious bill?

We need your voice TODAY to stand up against the chemical industry’s backwards bill. Click here to tell your senators to oppose it and support real chemical reform now!

If passed, endocrine disruptors and other chemicals that we know are harmful, including BPA and fire retardants, will continue to be put into products that we use every single day – with little to no regulation. It will be a terrible setback to protection of human health and the environment.

Here’s some of what’s wrong with Senators Udall’s and Vitter’s industry-backed legislation:

The chemical industry has spent $190 million on lobbying efforts to update TSCA over the last three years alone. Now that Senators Udall and Vitter have introduced their bill, you can bet that big chemical companies will be pulling out all the stops to get it passed. We must make sure our voices are louder than their millions.

The chemical industry should not get to dictate how chemicals are reviewed for safety. We deserve better.

Thanks for standing with EWG. Together, we can make safer chemicals a reality.