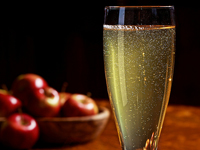 Beginning this May, fermented apple cider, or “hard cider” will be available at the Ecology Center Saturday Farmers’ Market, as we welcome Devoto Gardens. Here is a snapshot of the past, present, and future of hard cider and apple farms, as told by fermenting enthusiast Dylan Cardiff, our Farmers’ Market Operations Manager.

Hard cider is taking the nation as one of the fastest growing sectors in the beverage aisle. Beginning twenty years ago, hard cider hit the shelves of major stores as an alternative to the then-popular wine coolers and other alcoholic drinks. These ciders were often produced with juice that was bought, not grown by the cider companies. Simultaneously, a few farms across the nation, and some right here in our Bay Area backyard (like local legend Tim Bates at The Apple Farm) started pressing and fermenting their own juice and the direct farm-to-customer marketing of hard cider began.

With the Bay Area such a cross-roads for shipping and commerce, particularly for California grown produce, we enjoy the entire spectrum of the delicious goods produced. We also benefit from microclimates and soils that are immensely diverse, allowing many varieties of certain crops like apples to flourish. Take Watsonville and Sebastopol, for example: both about an hour from San Francisco, both known for their world class apples. Watsonville apples are famous for clear and sparkling juice (think Martinelli’s) and Sebastopol apples are better known for fresh pressed cider (think cloudy) and apple sauces. While these two regions still have some healthy and robust apple farms, the overall apple farming industry is smaller than in the past. Apple farms have to diversify and adapt their crops to current demands, or innovate how the apples are processed and marketed.

This is exactly the situation that faced “next generation” apple farming duo Jolie Devoto and partner Hunter Wade, of Sebastopol’s Devoto Gardens. They wanted to look forward to a future where they could continue the family apple farm, so they had a vision of taking the apples Jolie grew up with, combining it with a passion for hard cider and bottling it to meet growing demand. They were interested in selling directly at local farmers’ markets, but no one else had jumped through the appropriate legal hoops to bring hard cider to farmers’ markets. After successfully navigating the ABC laws, their “Apple Sauced” hard cider has been a huge hit at farmers’ markets since fall 2012. It’s also available in a few super markets, thanks to their home-grown distribution.

I met Jolie and Hunter in the cold beverage aisle of my local grocery store, and was immediately struck by how enthusiastic and warm-hearted they were. A neighbor introduced us, as fellow cider fermentors. They shared a bit about their courtship and mutual love of cider that became a months long European trip to study the various hard ciders produced there. I was told about the journey from there to making hard cider themselves from the Sebastopol family farm’s apples, and I soon found myself invited to a traditional “wassail” they were hosting.

Part party, part prayer, part ancient pagan ritual, wassail is a celebration and tradition performed to keep up the health of the apple trees for the next crop headed to the cider press. Involving poetry and song, the community that supports the apple orchard is invited on a long winter night to come “sing to the trees” in order to ward off evil spirits and guarantee a healthy harvest next fall. I was honored to be a part of the first wassail on the farm, and read a poem during the ritual. A special cider was prepared for the occasion, with some mulling spices, raisins, oranges and hops added to make it hearty and warming for the chilly winter night. A procession of revelers was led into the orchard by Jolie and Hunter, scaring off those evil spirits along the way with our powerful voices. After each round of song or speech, we toasted loudly “health to the old apple trees!” Then, taking a mouthful of cider ourselves, we also dashed a bit of it around the base of a specially chosen tree to remind it of what we all desired.

This May, the newest addition to the Saturday market will be Jolie and Hunter with their new-traditional hard cider. Available in twenty-two ounce bottles, you will be able to walk up to their stand and purchase directly from the farmer some of the finest hard apple cider around. Stick around and ask a few questions and you just might learn a few things about the subtleties and complexities of apples. You can join the few these days who know about “cider varieties” of apples, learning from the source – this next generation of apple farmers.