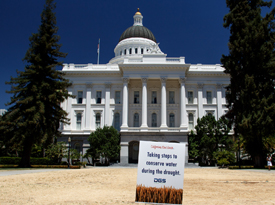 We’ve gotten a few sprinkles in the Bay Area since Governor Brown signed a package of bills to regulate the state’s groundwater resources last week, but the drought’s far from over. The move is vital to protect the future of local, sustainably grown food in California. It’s also long overdue, and it’ll be years before we see the impact, since the new laws require the creation of local groundwater agencies by 2017. Three years after that, in 2020, the new agencies are required to present groundwater management plans.

The drought is very much being felt now, especially by farmers. In a drought year, groundwater is more important than ever. It becomes the biggest water source for farmers with diminished surface water supply from snow pack. Unregulated groundwater leads to overdrafting, where so much water is pumped up from below ground that the water table is unable to replenish itself, leading to deeper water tables. Some water tables have dropped 200 feet just this summer, and groundwater pumping has also caused parts of the Central Valley to sink this year. To access the groundwater necessary to grow crops, farmers resort to drilling deeper and more expensive wells, further diminishing the groundwater supply, and forcing them to make hard choices. This well-researched article from the Fresno Bee provides insight into the complex issue of the drought, groundwater access and regulation, and how ordinary residents and big farmers alike are coping in the Central Valley.

It’s the small and medium farms that often can least afford to drill a deeper well, and are impacted most by a dropping water table. This regulation protects the future of their farm land, to continue to be viable and well-watered.  At our Farmers’ Markets, we’ve been seeing a range of issues tied to the drought – an absence of corn in the late summer was notable, as it’s one of the more water-intensive crops to grow. A few farmers have been hit especially hard by the expense of getting water to their crops. Tim at Riverdog Farm needed to rent a large excavator and widen and deepen an artificial pond they have on their property near Cache Creek. They are allowed to pump water from this pond – essentially groundwater that’s typically between 5 and 10 feet deep –  as a source of irrigation water. This year the pond has been dry, so he excavated down about 30 feet to get deep enough for there to be a large enough pond to pump from. He says that the groundwater table will rebound almost immediately once there is sufficient water in Cache Creek, after it rains.

Hamada Farms has pulled out of the market for the time being – and may not be able to return for a season. They have two irrigation pumps that need to be repaired and a dry well on their property that will need to be replaced. We asked Yuk Hamada if when these items were fixed, he would be back, perhaps when citrus crops are harvested. He said his citrus looks horrible, also because of the lack of water for them. He says they need consistent water, and much more than his other tree crops. This means they have missed the end of a peak stone fruit season at the market, are missing a secondary crop season, and the long term health of the trees are at risk because of a lack of water.

This reinforces a stark reality that farming is a tough job, one of the hardest out there. As city-dwellers, we can support them by shopping at the farmers’ market, which also serves to build relationships with them, so we know when a policy has the potential to help or hinder their livelihood. We can conserve our water, which mostly comes from surface water sources, and we can stay engaged on climate action, which will impact everyone, but will bring even more challenges to our food growers.

If thinking about all this lack of water has made you thirsty for more, check out the Watershed Environmental Poetry Festival this Saturday, adjacent to our Farmers’ Market in Downtown Berkeley. One new addition to this year’s event is We Love Water, a celebration of water and ways we can conserve it. It’s free just like the rest of the event, so come on and check it out!