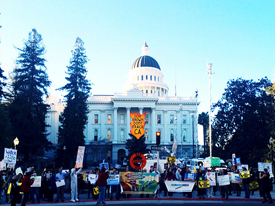 Governor Brown has called for Californians to voluntarily cut back water use by 20% to help ease strain on our water resources during the drought. What he’s kept quiet about is the water-intensive fracking wells throughout the state that may be developed under oil-industry friendly SB 4. Each well uses an average of 5 million gallons of water, adding up to hundreds of billions of gallons of water if plans for fracking go forward. Fracking also been linked to polluted groundwater in several states, putting even more strain on agricultural areas and rural communities that depend on clean, safe water from their wells. Food and Water Watch and other environmental groups have been calling for a moratorium on fracking until health and environmental concerns are adequately studied. “California is facing both a water crisis and a climate crisis, both of which would be made worse by fracking,” said Hollin Kretzmann, quoted in a press release put out last week by Food and Water Watch. “Governor Brown has a huge opportunity to tackle both these challenges by banning fracking. A ban would prove he is a strong leader when it comes to protecting Californians.”
Head to Food and Water Watch to read their full press release. They’re turning the pressure up on Gov. Brown to do the right thing. When all Californians are being asked to conserve limited resources, it doesn’t add up to give oil companies a pass to lay waste to our climate and water.