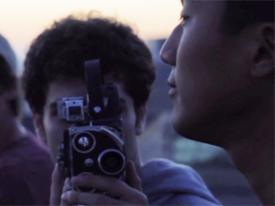 Celebrate GMO-awareness month this Thursday evening with a screening of “Genetic Roulette,” and Food Day on Friday with a Pop-up Film Festival of short food films!

The film “Genetic Roulette” points to genetically engineered foods as a major contributor to rising disease rates in the US population, especially among children. Gastrointestinal disorders, allergies, inflammatory diseases, and infertility are just some of the problems implicated in humans, pets, livestock, and lab animals that eat genetically modified soybeans and corn. Watch the film and participate with a Q & A panel of Label GMO activists on Thursday, October 23, at 7pm. For more details, click here.

Food Day is this Friday, and in honor of the occasion, we’re hosting a Pop Up Film Festival. We will be screening the winning shorts from the Real Food Media Contest Pop-Up Film Festival, 37 minutes of films total. Join for the films as well as informal discussion about food and farming. Bring-your-own brown bag lunch and join the conversation, this Friday, October 24 at 12pm. Click here for more details.