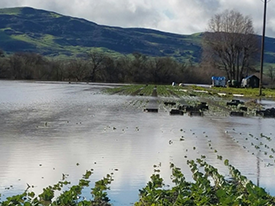 Galen Folk is the Ecology Center’s Youth Program Assistant. Since 2015, Galen has worked at the Farm Fresh Choice stand, providing healthy, affordable food every Tuesday to South Berkeley, and has supported our Education & Engagement program, and communications staff. Galen was key to the launch of the Ecology Center’s new Instagram account. This post is the result of Galen’s research and connection to California’s climate.

The 2016 rain-year, which began October 1st, is one of the wettest in California’s history. Much of the rain has been localized in the northern half of the state, relieving dwindling reservoirs and coating mountain tops in snow. Storms have pounded California, and over 90% of the state is now out of drought conditions. The final snowpack reading on May 1st, which predicts the amount of snow-melt we will get through the dry months, read at 190 percent of average. California’s historic drought is decidedly over.

The recent moisture has added colorful hues to our flowerbeds and landscapes, but is not without its drawbacks. Flooding across Northern California, most notably in San Jose and Sonoma County, displaced thousands of residents, closed streets, and rendered homes unlivable. Flooding has also affected agricultural fields. One of our market member farms Happy Boy Farms located in Watsonville, has experienced major flooding. High water has damaged tractors and fields and delayed the planting of next season’s crop. (They’ve launched a campaign to survive this tough time – help Happy Boy Farms recover: https://www.gofundme.com/happyboyfarms). Pfeiffer Canyon Bridge in Big Sur also fell victim to recent rains, where a mudslide critically damaged the bridge’s support structure. That section of Highway 1 will be closed for the next 6 months while crews build a new bridge. The Oroville Dam is another example of existing infrastructure not designed to handle the intense weather patterns we’re seeing where over-use of the dam’s spillway lead to massive erosion last month. This threatened the structural integrity of the entire 770’ tall dam, and prompted the evacuation of 188,000 residents.

This excessive flooding is no coincidence after the drought. Long dry spells make soil compact and baked solid, like a dry sponge. With the soil less permeable, combined with urbanization that paves over permeable soil, water doesn’t seep into underground aquifers. Instead, rainwater collects at the surface, and runs straight into the ocean, flooding rivers and fields in its way. The topped-off reservoirs and snowpack will provide plenty of fresh water for the foreseeable future, but with depleted groundwater, there’s little water supply to rely on to carry us through when the next drought hits the state.

The droughts and subsequent flooding seen in California are not an isolated phenomenon. The evidence is undeniable that the core cause is global warming. Extreme weather patterns stem from the same roots as melting ice caps, and rising air temperatures. Living in an interconnected ecosystem means we must prevent climate change on all fronts to maintain California, and the rest of the globe, as a habitable landscape. Currently, we as individuals can help mitigate the effects of drought by doing our part to preserve and conserve water where we can. Landscaping our lawns with native drought-tolerant plants, and using laundry-to-landscape greywater systems will make a big impact for those with yards. (The Ecology Center is offering a hands-on class to learn to install a greywater system at a home in Walnut Creek, on May 13th. Sign up here!) Catching rainwater to water plants is another way to save water.

Adapting our water use to respond to climate change isn’t a cure, though. The real solution is large-scale change in the way we consume and pollute. That is the only path to reduce the life-threatening droughts and floods in California.

2 thoughts on “Ebbs and Flows: State of Water in California”