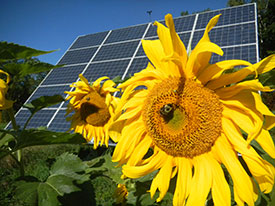 East Bay Express has featured a game-changing energy initiative for their Local Economy issue this week: Alameda County’s plan to create its own renewable energy supply to combat climate change and create thousands of jobs. Community Choice Aggregation (CCA) programs empower local governments to source their own power supply for customers within their area, while using the existing utility grid for delivery. This means creating an alternative to PG&E without having to build an entirely separate system. Instead, in places like Sonoma and Marin where these programs are running successfully, ratepayers are saving money on their energy bill, and the energy is cleaner (leading to fewer greenhouse gas emissions) than what PG&E offers. They’ve also been able to build new renewable energy projects, leading to the creation of local, green jobs. With a newly appointed steering committee, work will soon begin on assessing what a program could look like in Alameda County. Click here to read the article from East Bay Express.

This exciting development wouldn’t have been possible without the effort of advocates, who have moved the program forward while also fighting back against several legislative efforts backed by PG&E. The utility provider sees CCA as a threat to their monopoly. The Community Choice Energy working group of the Berkeley Climate Action Coalition has helped advocate, educate, and raise awareness about CCA, and it’s to their credit that it is now on the table as a potential new program for the county. You can watch a video of a panel event the working group put on this spring that discusses where the program is at.

To get involved in moving Community Choice energy forward, you can join the working group which meets quarterly. Participation in this working group and the Berkeley Climate Action Coalition is open to anyone who is interested in helping Berkeley achieve its climate goals. Contact Rebecca Milliken, Climate Action Coordinator, to learn more.