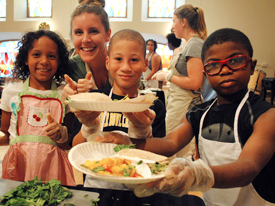 The latest edition of the East Bay Express is out, with a feature on Berkeley’s proposed 2014 ballot measure to place a tax on distributors of sugar-sweetened beverages. The article outlines the Berkeley Vs. Big Soda campaign as a grassroots effort to stanch rising levels of obesity and diabetes, especially among low-income communities of color. We’ve been behind this effort from the beginning. In the long run, a soda tax would decrease consumption of unhealthy beverages, and as soda companies profit, a pocket of money would also grow that Berkeley could use for under-funded health and nutrition education.

The East Bay Express article gets the back story to this campaign right. It is vital as the campaign heads into election season that voters and leaders in other cities know what this campaign is about, and coverage like this can help spread that message. We don’t know yet what the American Beverage Association will throw at Berkeley to demobilize the campaign – as they’ve done in every other city where a similar attempt has been made. They’ve already commented their position on the East Bay Express article. Here’s a few simple actions you can do to help this community-led campaign have solid support into November: