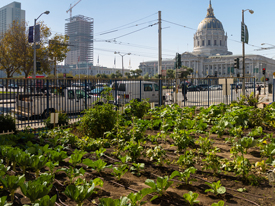 Please come to the Berkeley City Council meeting Tuesday, May 6th at 8pm to voice your support on two key measures under consideration. Both are crucial to driving the expansion and promotion of urban agriculture within Berkeley:

1. The City is considering a Parks Bond for the November ballot. The Council will set spending caps depending on the community’s presence and advocacy that night. We want the Parks Bond to include funds for the development of the Santa Fe Right-of Way: to change it from fenced, weedy vacant lots into gardens, greenway, and other uses. We want the Parks Measure to include funds for a volunteer/grants coordinator and a mini-grants program, to facilitate community-based stewardship of our open space, like our neighboring cities practice. This opportunity won’t come around again for a generation.

2. The office of Jesse Arreguin is requesting that the City Manager work with stakeholders to explore the possibility of a garden within one of the wide medians located on Sacramento Street between University Avenue and Dwight Way. The “Median Dry-Growth Garden Pilot Program” is proposed by local urban gardener Rene Zazueta, who works closely with UC Berkeley Professor Miguel Altieri on agro-ecology projects. This project is an example of an innovative idea that deserves a conversation. Read more here.

The Ecology Center strongly advocates for the expansion and promotion of urban agriculture. Growing more food in the city is a key strategy for fulfilling multiple community goals: improved health, food security, and improved resilience to climate change and disaster. For Berkeley to move forward on this front, there must be more open dialogue and partnership between the City and the Community. Come lend your voice to these matters! Please show up and be heard at 8pm, Old City Hall, at MLK and Center Street.