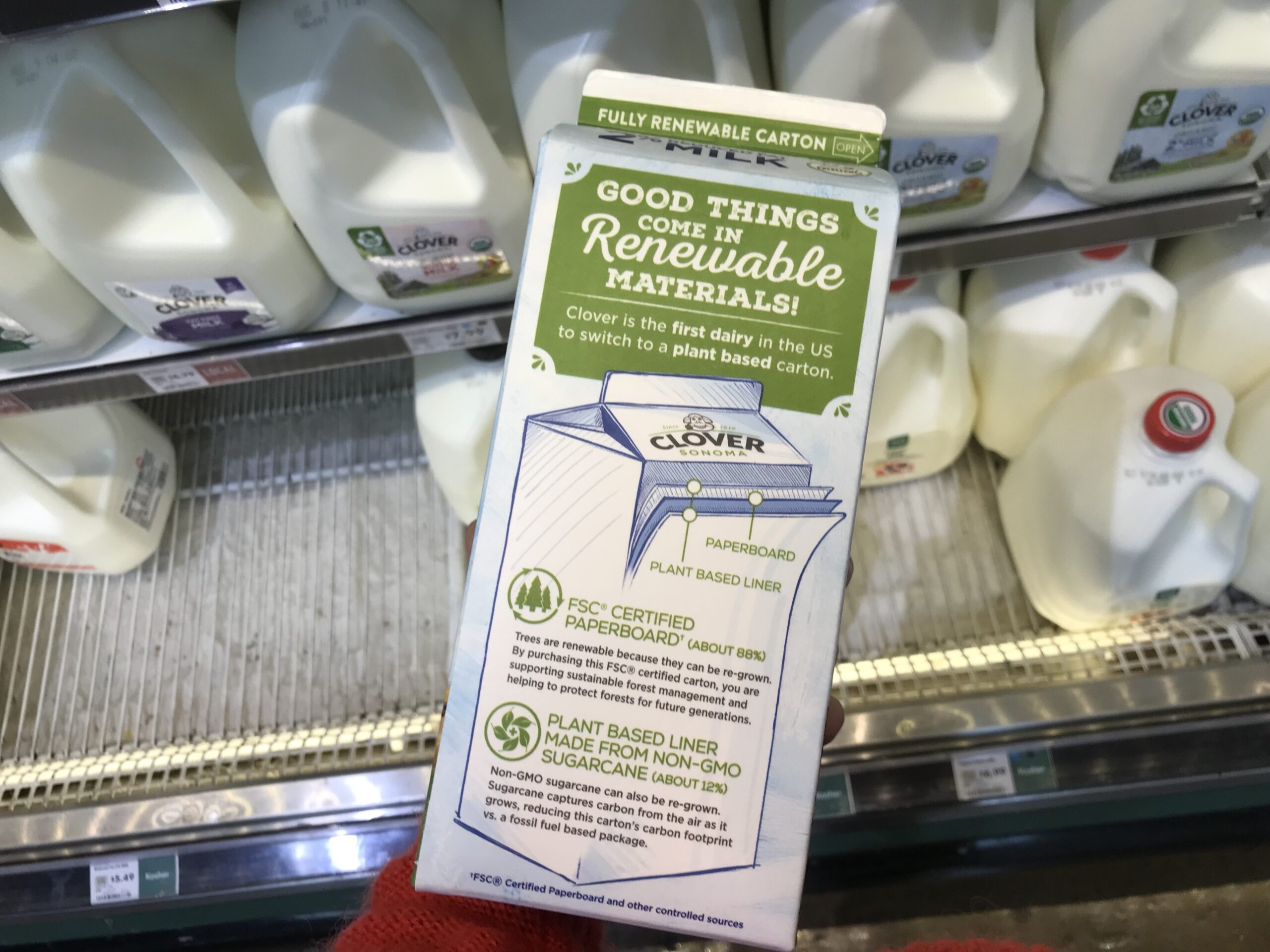 By now, you have probably seen or bought Clover Sonoma’s “Fully Renewable Carton.” Having introduced the carton in 2020, Clover claims to be the first dairy company in the US to switch to a “renewable,” plant-based milk carton. But what does plant-based mean when it comes down to disposing of the empty carton?

Unfortunately, because this is a mixed material carton it cannot be recycled in Berkeley. Clover’s carton is made up of paperboard paired with what the company describes as a “green bioplastic” liner. While the FSC (Forest Stewardship Council) certification that the carton boasts is promising, this certification simply means that the paperboard portion of the carton has been produced using sustainable forest management practices.

Paperboard by itself is accepted in Berkeley’s residential curbside recycling program, but the added plastic liner disqualifies the carton from being recycled. Clover isn’t alone in this predicament. All plastic linings, regardless of if they’re made of fossil fuels or plants, make milk cartons non-recyclable in Berkeley. This is because separating the paperboard from the liner is simply not feasible nor cost effective. At the materials recovery facility (MRF) in Berkeley, paper products are baled separately from plastics because they will be recycled into different end products. For example, cardboard is often recycled into cereal boxes. But separating the thin plastic lining from the paperboard of a milk carton costs too much in terms of time and energy spent to be worth the hassle. A 2020 study by The Recycling Partnership found that cartons and aseptic containers are the second most common material to be no longer accepted by residential recycling programs across the US.

Paperboard milk cartons once had a wax coating which allowed them to be composted, but producers switched to a polyethylene plastic coating several years ago. All milk cartons, including Clover’s, are not recyclable in Berkeley’s residential curbside recycling program. 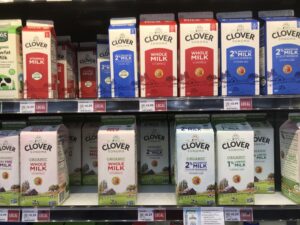 Although Clover’s carton has a sugarcane-based liner, the liner is still a form of plastic. It takes too long to break down to be accepted in the City of Berkeley’s municipal composting program, which only accepts BPI certified compostable materials. While many plant-based plastics eventually decompose, this restriction exists because the Recology facility that Berkeley’s green waste is sent to processes materials in as little as 60 days. This means the Clover carton belongs in your gray landfill cart.

By using a plant-based liner, the Clover “renewable” carton reduces our reliance on fossil-fuel based plastics. However, because it’s made of organic materials, as the carton breaks down in a landfill it will release methane, a greenhouse gas 25 times more effective at trapping heat than carbon dioxide.

To avoid a milk carton that has to be landfilled, consider buying your milk in a glass bottle. As early as the 1930s, milk delivery in the US used glass bottles that were washed and reused again. This system was largely replaced by chain grocery stores after World War II, but glass milk bottles are still available today in many Bay Area grocery stores. You’ll pay a deposit when you initially buy it, but you receive the same amount when you return the empty bottle with your next purchase. In addition to being recyclable at the end of its life, a study out of the Center for Sustainable Systems at the University of Michigan found that with just five uses, glass milk bottles are less energy and carbon intensive than plastic milk jugs and paperboard milk cartons.

To learn more about the Ecology Center’s residential curbside recycling program visit our webpage. For information about what’s accepted through Berkeley’s commercial waste service, visit the City of Berkleley’s website. To learn more about how to sort your waste, visit Resourceful, our digital waste sorting guide.

5 thoughts on “How to Sort Clover’s Renewable Milk Carton”