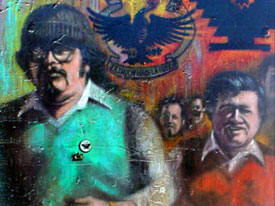 Ecology Center staffer Lorenzo Flores has family connections to the UFW and Chicano movements. Here, he shares his history, and how his present role serving on the César Chávez Dolores Huerta Commemoration Committee has brought him full circle.

“Sí Se Puede! Sí Se Puede! Sí Se Puede!” follows the sound of one loud single hand clap from the crowd, a pause, another round of everyone clapping in unison, a shorter pause, and so on, until the room breaks out into a loud, boisterous raucous filled with phrases like “Que vive la Raza!” and “Órale!” I saw this scene play out many times as a child, in all sort of circumstances; marches, rallies, committee meetings, celebrations, pretty much any large gathering of brown people. Most of the time, I wasn’t exactly sure what the adults were cheering for, just that it had to do with “La Causa” or “the Struggle.” As a kid, I was simply excited to clap and yell loudly; it also signified that my dad and I would be going home soon, maybe even grabbing a chili-cheese burger from Tommies.

By the time I was born in 1983, my father’s activist spirit had identified he could most effectively create social change by educating younger generations of Latinos. It made sense, given that he was, for all intensive purposes, a first generation Mexican American as well as the only one of four siblings to attend college. He grew up in Los Angeles’ West Side, home to the Venice Boardwalk and Santa Monica Pier, both places he frequented in his youth. He would reflect on his days hanging out with other kids from his predominantly Latino neighborhood, or as he called it “the barrio.” He’s not around for me to ask today, but I believe he saw the ease with which very promising young minds would veer astray into gangs, drugs, or the military, and identified that education was a doorway to a world beyond it all. He built his professional life around the concept that knowledge is power and sought to disseminate it to any willing ear.

My father, Lorenzo Tomás Flores (a.k.a Toppy), was born on September 24, 1954. He attended college in the 70s and became very active within the Chicano movement of that time. After bouncing between a few campuses, he landed in the Chicano Studies department within the California State University at Northridge (CSUN). He was with the department for 30 years and was a big participant in the United Farm Workers movement. In fact, the painting to the left sits in the department’s writing lab and is a reproduction of an image taken in the late 70s depicting my father working security for César Chávez. The UFW movement was paramount in establishing a solid activist foundation with which my father and his colleagues would go on to battle campus administration, support or fight various propositions, and ultimately strive to bring change to the barrios where they grew up.

I really didn’t understand that as a child. For me, the marches, meetings, and rallies were boring affairs for which I had to share my father’s attention. My parents divorced when I was very young, and since I couldn’t stay at home by myself quite yet, the only option was to drag me along, sometimes literally kicking and screaming. As soon as I entered high school and could stay home, I heard “Sí Se Puede!” and the Chicano Clap significantly less. Throughout high school I was focused on academics, computers, and video games. To my teenage mind, “La Causa” was Dad’s “thing” and I needed to distance myself so I could find my own path, my own causes.

I was offered admission to UC Berkeley for the Spring 2002 semester. I took classes at Vista Community College (now known as Berkeley City College) during the Fall 2001 semester and lived with my sister, Belén Ixchalchihuitl Flores, who was a recent Berkeley graduate and a huge influence on my decision to apply to Cal. It was during that first semester, while attending Vista, that my father was diagnosed with Pancreatic cancer. He was told he could expect to live three to six months and quickly began participating in research trials using extremely aggressive chemotherapy. He continued to teach in the CSUN Chicano Studies department until just a month before his passing on October 2, 2003. I was in my second year at Cal by that point and had lost my biggest connection to the Raza movement. After his passing, I took a semester off, then returned to school and focused on finishing my degree.

When I graduated in 2006, my primary concern was finding work and securing financial stability. At the most inopportune time, I was slapped with a $300 parking ticket. I noticed that I could pay by fulfilling community service hours instead, by volunteering with an approved organization. I gave the clerk my address, and the Ecology Center was one of the first entries to come up. It was five minutes away and sounded like a great place to spend my 50+ community service hours. A majority of my volunteer time was spent updating the EcoDirectory, and I helped out at Farmers’ Markets events as well. I enjoyed it so much that I continued to volunteer for some time after paying off that ticket. I eventually stopped when I entered graduate school for Computer Science.

In 2012, after completing course work and focusing solely on thesis experiments, I no longer qualified for financial aid and had to find work. In what could only be described as a cosmic alignment, the Ecology Center was hiring for a new IT Coordinator. I took the mantle of IT Coordinator and all the duties bestowed upon the role, including updating and maintaining the César Chávez webpages. For some time, the Ecology Center has participated on the César Chávez Commemoration Committee. For me, this was simply further confirmation I had made the right choice in working for the Ecology Center.

My first meeting with the César Chávez Commemoration Committee was on August 18th, in the Cypress room at Berkeley City Hall. Immediately upon entering that room, I was hit with a wave of nostalgia for a time when I would accompany my father to meeting rooms just like it. Everything from the assortment of mostly matching office furniture to a chalkboard were reminiscent of rooms my father dragged me to in my youth. It was also at that first meeting that I learned the committee had just elected to rename itself to the César Chávez Dolores Huerta Commemoration Committee and that we had procured a day’s worth of Dolores Huerta’s time for a September 27th event.

In an effort to ensure the event planning process went as smooth as possible, I took it upon myself to create a listserv, keep and disseminate meeting notes, send meeting reminders, and try my hardest to keep promotional graphics on hand to forward when needed. In the days leading up to the event, I formatted the committee’s proclamation acknowledging Dolores Huerta’s efforts and our promise to commemorate them, visited the event venue to discuss logistics, readied a wonderful set of slides created by Alejandro Soto-Vigil’s talented intern, and assembled a basket of locally-grown fruit to present to Dolores Huerta as a token of gratitude on behalf of the committee and Ecology Center. As important as it was to help host such a high profile figure of the UFW movement, my primary motivation was to honor my father’s work and acknowledge that I finally understand why he had to take me to those meetings, why he had come home late so often, and why there is still much more work to do.

Unfortunately, many of the issues my father’s generation of activist Latinos fought for are still issues to this day; Latino graduation rates are still very low, families are torn apart as collateral damage in the immigration process, and we face a troubling rise in health related problems which threaten our quality of life. These are all issues Dolores Huerta spoke to during both the Teacher Teach-In and the Passing the Torch ceremonies. She also emphasized the necessity of inspiring activism in younger generations to ensure we don’t lose what little footing the Chicano movement made in the 70s and 80s. “La Causa” is very much alive and in desperate need for new voices to pick up the flags and march forward. I’m happy to say that this time, when I heard the chant of “Sí Se Puede!” followed by the Chicano Clap, heading home was the last thing on my mind.