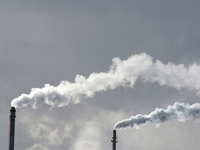 After the latest auction of greenhouse gas emission “allowances” under the state’s cap-and-trade law, the trend of slowly rising carbon prices at auction show that the new system is working. What’s working for the new system less well is Gov. Jerry Brown – he has  “borrowed” funds raised from these auctions to balance the General Fund budget. Since A.B. 32 was passed mandating that these funds be spent on reducing carbon emissions or offsetting impacts of climate change, this move has generated some controversy for the Governor. For more on the gradually rising price of carbon in our state, head to this article at sfgate.com.