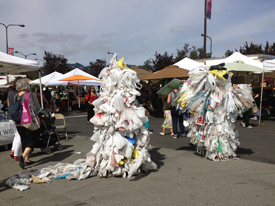 We were bolstered this year as SB 270, California’s bag ban, made its way through the legislature, and landed on Gov. Brown’s desk late last month. As he signed it, he wrote, “This bill is a step in the right direction – it reduces the torrent of plastic polluting our beaches, parks and even the vast ocean itself. We’re the first to ban these bags, and we won’t be the last.”

This new law will go into effect in 2015, and means that single-use plastic bags will no longer be an obligatory part of every purchase. Instead, consumers may either bring a reusable bag, or pay 10 cents for a paper bag, or more for a durable, reusable plastic bag. Cities and counties with bag bans already in place, like Alameda County and San Francisco, will be unaffected.

For zero waste and environmental advocates, this was a well-earned victory years in the making. Many previous attempts had failed, but this one made it with widespread support, including from grocers, who already have adjusted to local bag ban ordinances throughout the state. The celebration has been short lived, though, because the fiercest opponents of the bag ban, the plastic industry, have filed a referendum against SB 270. If they collect the required number of signatures within 90 days, the bag ban will go on the ballot in 2016, and will not go into effect in 2015 as planned. This means a delay in reducing pollution and litter, and unnecessary millions of plastic bags used in the meantime. For a sense of the scale of impact a bag ban has, in Alameda County the bag ban resulted in 35 million fewer plastic bags, and 5 million fewer paper bags in 2013 compared to 2012, before the ban was in effect.

Californians Against Waste, who led efforts to get SB 270 passed, is turning around to respond to this latest threat. Visit their website to stay involved or volunteer to help this counter-campaign. You can read more about SB 270 and the referendum against it from Sacramento Bee. Also watch out for industry-funded, misleading campaigns about the “benefits” of plastic bags. We were appalled to find one such site, “Bag the Ban” as a top result in a recent search.

[Photo: Two Plastic-bag monsters visited our Farmers’ Market recently. Their costume is made from the average number of bags used by one person, in one year]