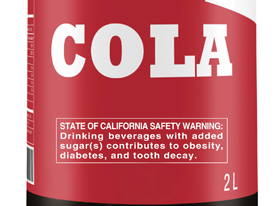 High rates of obesity and diabetes have been linked to drinking soda and other sweetened beverages. The good news? There’s a variety of solutions to protect our health and keep healthcare costs down. Berkeley’s proposed Healthy Child Initiative, putting a 1-cent-per-ounce tax on sugary drinks, is one route that’s been shown would reduce consumption, and prevent deaths. Initial surveys show that a majority of Berkeley voters are supportive of this strategy, and a recent poll found that 74% of Californians support taxing sugary drinks, and 64% support that money going toward health, nutrition and physical activity programs in schools.

At the state level a second strategy is moving forward: a warning label, similar to those on cigarettes. At a press event last week, State Sen. Bill Monning introduced SB 1000 alongside several statewide health groups. The label would be required on beverages with added sweeteners that have 75 or more calories per 12 ounces. The label would read “STATE OF CALIFORNIA SAFETY WARNING: Drinking beverages with added sugar(s) contributes to obesity, diabetes, and tooth decay.” Similar to tobacco warnings, the goal with the label is to allow consumers to make informed decisions when it comes to their health. This announcement was covered by the LA Times, Sacramento Bee and Washington Post.

Pulling again from the campaigns against tobacco, there’s even a third strategy. Jeff Ritterman, a doctor who has been a local leader for solutions to the sugar-induced health epidemic, wrote a piece for Huffington Post that makes the case for taxing, labeling and calling for hospitals to “Kick the Can” and stop offering sugary drinks as a beverage choice.

Let’s call all of the above a start. It’s exciting to see these strategies sparking conversations about health and equity, and getting covered by the media.