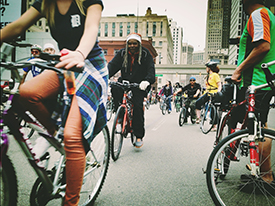 Get ready to show a little extra bike motivation tomorrow, it’s Bike to Work and School Day in the East Bay. The forecast is for a few showers, making it unusually exciting weather for this annual event, which last year had record-breaking participation. Members of the Berkeley Climate Action Coalition‘s Transportation Working Group will be heading to a pop-up bikeway demonstration on Milvia bike boulevard, in front of City Hall and Berkeley High School in Downtown Berkeley.

The Transportation Working Group has been taking a close look at Milvia, after completing a traffic survey during morning drop off time around the high school. Between 8 and 8:30 a.m. on four different weekday mornings in February, Transportation Working Group members Linda Currie and Marjorie Alvord organized a group of volunteers consisting of Berkeley High parents and students, planning professionals, and community members to count motor vehicles and bicycles traveling on streets near BHS and dropping passengers. The findings on traffic hazards created by bike and car conflicts are detailed in their report, Milvia Bicycle Boulevard: Changes Needed. The report outlines potential remedies to the safety concerns, including traffic calming measures on Milvia Street near Berkeley High, converting bike lanes to protected bike lanes, and promoting non-car travel to school.

Seeing a demonstration of what’s possible on Bike to Work and School Day helps make potential solutions feel within reach. This vision is supported by the fact that the City of Berkeley is underway in updating its Bike Plan, so changes to bike safety and infrastructure have a good shot at happening – but only if community members get involved and advocate for the best possible plan.

Head to Bike East Bay for information on all the Bike to Work and School Day action, and we hope to see you out there on two wheels!