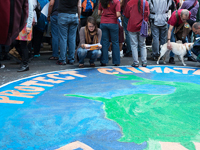 The mayors of Berkeley and Richmond announced today that they are committed to divesting city funds and pension investments from fossil fuel companies. This follows San Francisco’s Board of Supervisors unanimous vote on Tuesday to urge their $16 billion pension fund to divest from fossil fuels. It’s an exciting moment for the fossil fuels divestment campaign, organized by 350.org. Their campaign began with colleges and universities and has now expanded to local governments. So far, 11 cities across the country have made commitments to divest, including our three local champions. There’s a great quote 350.org has from Desmond Tutu, renown for his successful campaign to end apartheid, “The divestment movement played a key role in helping liberate South Africa. The corporations understood the logics of money even when they weren’t swayed by the dictates of morality. Climate change is a deeply moral issue too, of course…Once again, we can join together as a world and put pressure where it counts.” To read the latest, and get involved in a local government or university campaign, head to gofossilfree.org