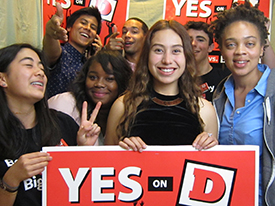 [Press Release] The City of Berkeley announced yesterday that it collected $116,000 for the month of March from Measure D, the sugar-sweetened beverage tax that voters passed overwhelmingly last November. Given that the tax focused solely on a few dozen major distributors, the City estimates annualized receipts of at least $1.2 million.

“The implementation has been very smooth,” says Berkeley City Council Member Laurie Capitelli. “As the first city in the nation to implement such a tax, there was no template and no history to use as a guide. So we approached our task methodically, cautiously, and deliberately, and now Berkeley has established a simple straightforward process that is an example for others to follow.”

In advance of the first month of tax collection, the City published a FAQ to help distributors comply with Measure D. Coca-Cola announced that it would “be fully compliant” with Measure D and stated their intent to “add…a surcharge for products that fall within the scope of the ordinance.” In January, Dollar Tree decided to remove sugary drinks off the shelves of its two Berkeley stores and to replace them with water.

“We are thrilled to see that the City has worked so quickly and efficiently to implement the tax,” says Martin Bourque, Executive Director of the Ecology Center, a lead organization behind the ballot measure. “Our community desperately needs these funds for childhood nutrition education and diabetes prevention programs.”

The City Council appointed nine individuals to the Panel of Experts, a requirement of Measure D. The panelists, whose role is to recommend where the soda tax funds get allocated, reflect Berkeley’s racial and economic diversity and include public health experts, doctors, nurses, community activists, civic leaders, and researchers. The panel’s first meeting is scheduled for tonight, Tuesday, March 19 at the North Berkeley Senior Center, from 7-9 PM. It is open to the public. For more details, click here.

“We are tired of burying our family members,” says Xavier Morales, a member of the Panel of Experts and Executive Director of the Latino Coalition for a Health California. “We are about ten years behind when we should have started doing something about the diabetes epidemic.”

The panel will consider recommending that the City Council dedicate $250,000 of Measure D’s projected revenue to Berkeley Unified School District for its cooking and gardening program, which lost millions of dollars in state and federal funding. “The School District appreciates the voter’s commitment to the health of our children,” says Berkeley School Board President Judy Appel. “Investing in our gardening program is investing in developing strong, healthy food habits for our students. We are committed to this mission and urge the Panel of Experts to invest in this program.”

“We know that many other cities in California and around the nation are watching to see happens with Measure D,” says Josh Daniels, co-chair of the Yes on D campaign and Berkeley School Board Member. “Berkeley’s successful start serves as a green light for these cities to seriously consider whether a similar tax is right for them.”