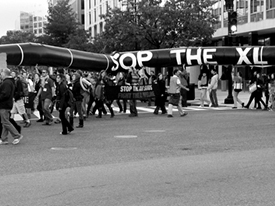 The Keystone XL project seemed to move forward quickly last week, as a key court decision in Nebraska failed to stop the pipeline, and a new Republican-led congress took it up as a first order of business in 2015. Environmentalists nationwide are not giving up without making their voices heard loud and clear by President Obama, who has the ability to veto the proposed bill, and to stop the project once and for all. The Sierra Club is circulating this online campaign to send a message to the President, and local vigils are being planned for tomorrow evening. Join 350 Bay Area at a vigil near you, check locations here.

It’s been a long battle over this pipeline, and while the events of the past week are undoubtedly a bloody nose, there are a few important aspects to still keep in sight. Here’s some links to bring the big picture home: