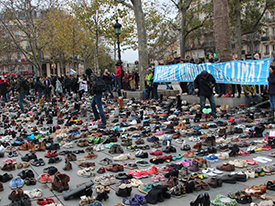 On Saturday, the UN’s COP21 conference wrapped up, with island nations rallying around the call “1.5 to stay alive.” The landmark agreement that 195 countries joined acknowledged for the first time that temperature rise can not exceed 2 degrees celsius, and that 1.5 degrees was a target that should be worked toward to avoid catastrophe for low-lying nations. This goal is an amazing accomplishment by the delegates, but also requires substantial effort to meet. Read more about this huge outcome from Paris here.

As we take heart from the Paris agreement, and turn our focus to how we can ramp up reduction of greenhouse gas emissions, there’s some important local decisions that do the opposite of what we want, by harming the future of local, renewable energy. Local organizing group 350 Bay Area has sent out an alert that the California Public Utilities Commission (CPUC) – the agency that sets rules and regulations for energy – is considering two changes at their meeting this Thursday, 12/17 in San Francisco. If you can attend, you are encouraged to do so, and give public comment. Brief descriptions of the two issues at play, CCA exit fees and rooftop solar net metering, are below.

Whether or not you can attend the meeting, you can send a letter to the CPUC here. Audrey Ichinose, Berkeley Climate Action Coalition Community Choice Energy Working Group member, sent the following letter to the SF Chronicle, with hopes of drawing attention to this critical issue:

I am part of a working group on CCAs (Community Choice Aggregation) in the Berkeley Climate Action Coalition. A PG&E proposal to double the so-called “exit” fee it charges customers who quit their service is pending before the CPUC, with the final hearing and vote scheduled for December 17, 2015.

A higher exit fee concerns us because of the discouraging effect it would have on the Community Choice Aggregation program that is in the works for Alameda County. This CCA, the East Bay Clean Energy program (one of its several names), seeks to create a not-for-profit community-owned utility to distribute electricity to Alameda County residents. Like the already operating Marin Clean Energy and Sonoma Clean power, it promises to deliver cleaner electricity at comparable or lower rates than PG&E provides. It also promises to help the state achieve its renewables goal faster than PG&E would and allow communities to enjoy the jobs and other economic benefits of the burgeoning green sector. Alameda County and San Francisco are not alone in looking at CCAs. (“Contra Costa Power Generation Agency Weighed”, Contra Costa Times 11/25/15 and “Bay Area communities gearing up to create their own power systems,” San Jose Mercury News, 11/29/15) Dozens of communities throughout California have taken steps in the same direction.

PG&E’s proposed doubling of the exit fee would obviously discourage customers from signing up with a CCA. While the for-profit utility has legitimate business concerns about paying for already contracted purchases with diminished revenue, it cannot ask former customers to pay for most, if not all, of the obligation, and for the foreseeable future. These former customers (who previously had no choice of service due to PG&E’s monopoly) will be paying twice for their electricity going forward.

Please shine some light on this critical issue. The public needs to know much more about how and why the CPUC makes its decisions. It’s especially important since our energy infrastructure needs to change fundamentally in the face of climate change.

Net Metering Changes Would Harm Growth of Rooftop Solar in California
The utilities have proposed a program that would significantly reduce the amount that customers with rooftop solar are paid for the energy they produce, and that would make it almost impossible for customers to “zero out” their energy bills, as they can now. Thursday’s meeting will provide an opportunity, at the beginning, for public comment for this proposed rule change that would take effect next year.

Sign this petition to the CPUC to tell them you want rooftop solar protected as a tool to reduce the harm of climate change.

We’ve been a proponent of Community Choice programs since a working group of the Berkeley Climate Action Coalition formed around this issue. We recently sent out an appeal to our community focused on our climate work and how we’ll carry it forward. If you care about this kind of work, we’d appreciate your help in supporting us with whatever amount you can manage. Thank you!